This would be the nature of light.

Why is the nature of light important? Because the makeup of the Soul relates to light in composition. Not just light of course, there are other forces and factors involved as well as consciousness etc, which we will have to explore later. But for now we'll discuss the light factor, as this is easier to explain.

To describe the soul, we'll use the analogy of a Star. A Star that permeates all dimensions inside and outside of time space. The star emits light, and that light travels outward from itself. 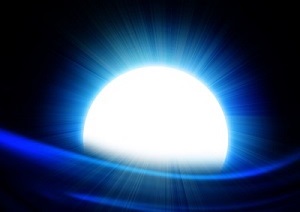 Like the picture of the star above the light travels out from the star in many different spokes or rays. Think of those rays as concentrated forms of focused individual energies that although a part of the Star, have the characteristic of being individual from each other, differing in path, brightness and force but still belonging to and connecting to the same source. Now each ray of light has its own path and that path is kind of pre-determined but not in the way that you might think.
Before we get to that, lets concentrate on the path of one of the individual spokes of light, where its coming from and where it is going. The light spoke branchs out from its source, still using the star analogy, but imagine the star being pure white light and occupying a position outside of time space and the dimensions of the universe.

The light travels out in a wave and crosses a medium, we're going to have to use the prism refraction example for this because its the closest thing to the behaviour. When it hits the medium it kind of refracts and bends like below 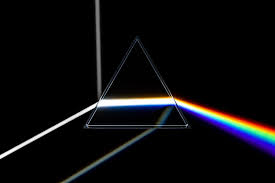 Note the way it bends into different colours. Now imagine every possible hue of colour found in that rainbow, which is well over 100 million colours, those 100 million + colours represent the possible dimensions, planes and realities in the universe each having its own individual frequency. The light which has come from the Soul has travelled out and upon encountering the refracting medium now exists in over 100 milion dimensions, planes, and realities of the universe. But the lightwave doesnt stop, it keeps travelling outward, so not only does it exist in multiple dimensions etc, and heres where it gets a little tricky to explain

Have you heard of Copenhagens interpretation of many worlds? or the double slit experiment and superposition?  In physics, copenhagens interpretation the hypothesis states there is a very large, perhaps infinite number of universes, and everything that could possibly have happened in our past, but did not, has occurred in the past of some other universe or universes. When it gets down to it, its speaking of timelines, any possible choice that you can make in any given point in time actually exists, all choices and all possibilities.

The spoke/ray of light that is travelling doesnt' travel in one unfolding history, but instead has a kind multiple pre defined course that divides itself outwards, and splits off into different timelines at multiple points.

Now that we have the analogies out of the way, basically the Soul when it chooses an identity or identities for a particular lifetime in whatever time period it chooses, kind of reaches one or many of its spokes outward into the non physical and physical dimensions of the universe in order to experience, not just one unfolding history but all possible histories on many different timelines possible for that identity in that lifetime. All choices that identity could make. Different experiences for that general time period etc.

So what is Enlightenment then? Okay have you ever heard when people say they've had a near death experience, and upon death or near dying I should say, many of them report seeing a light at the end of a tunnel? That light at the end of the tunnel is a direct path of the spoke/ray of light back to its source, where the identity when it sheds its physical form can return that part of its consciousness back to the whole.

Enlightenment is kind of connecting your consciousness back to the superconscious whole of the soul and experiencing what they call Nirvana, or spiritual bliss, because it is there that you fully realize who and what you are as a divine being. The Soul in its greatness and power is vast in its consciousness. Kind of like God, just a bit smaller obviously, but still with the power to create realties within the universe, and manipulate timelines, have millions of identities across time and space, that kind of thing. When you actually achieve enlightenment you will discover that the many limitations that you thought you had were just an illusion.

The process of connecting yourself back to your source or your Soul Consciousness is the tricky part though. Because the path itself is kind of blocked by the ego or the mind part of your consciousness. This is the part, that the Soul creates in order to express an identity, and that Ego, or mind consciousness is usually bound very tightly to itself, and thats what makes it slightly difficult to transcend. It believes that it IS that identity, and doesnt realise its actually only one of many that is part of one giant superconsciousness. Its also can identify with very negative ideas about itself, like, guilt, shame, being undeserving, feeling small about itself or its polar opposite having inflated opinions about itself being better than others, being judgmental, jealous etc. All of these have a negative resonance, and because this translates lower on the Auric light scale, this field or aura that results acts as a filter. It is harder to perceive from your higher consciousness because of this negative filter that stands in the way between you and your greater potential.

Enlightenment is becoming aware of your higher consciousness, your soul, your light, your power. It is why some of the greatest figures who have become Enlightened in the past are looked upon as divine. Anyone can do this really, if you understand who you really are.