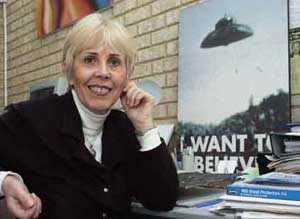 Mary is recognised Internationally, as one of Australia’s leading researchers in the UFO and Contact phenomenon. She has lectured in the USA, Canada, Hawaii, UK and New Zealand. She appears regularly in national and international media news programs and in documentaries such as Australian Documentary ‘OZ Files” and the BBC television program, “the “Paranormal Files” (UK.) and Discovery Channel Animal X. She has also participated in a University debate forum on this phenomenon, in 2006 at Oxford University, UK.

“Awakening,”How Extraterrestrial Contact Can Transform your Life" (2000) Published by Fortune Books UK. “Awakening" has been republished (2005) Michael Sharp, Avatar Publications, Canada. Author and Physician, Dr Roger Leir, said of ‘Awakening’ : “In my opinion this book will become the Bible of the Alien Abduction Phenomenon.’

Awakening, contains information on many complex issues relating to Contact, some previously unexplored data. The transformative aspects of Contact experiences such as : heightened awareness of other ‘realms,’ psychic and healing abilities, the manifestation of strange scripts, complex art work, symbols and strange languages. It explores how the children with contact, manifest many of these multidimensional and extraordinary abilities, called the ‘New Human’ homo noeticus or ‘Star Children.’

Mary’s research records testimony from small children even younger than 2 years old, recall experiences on extraterrestrial space craft. One “eight year old” described a ‘downloading’ of information from the extraterrestrials, articulated by her as ‘knowledge bombs', i.e. Complex data conveyed through mental images and concepts, which seem to create a ‘heightened consciousness level.’ Research has shown the 'Star Children' exhibit a maturity and wisdom beyond their years, awareness and connection to spiritual realms.

Mary’s research shows while many "Star Children" sometimes called "Indigo’s " have telepathic abilities, and are spiritually awakened and describe seeing "Beings of Light" (angels or light beings), the main difference is that "Star Children" have recollections of encounters with extraterrestrial beings and of being taken aboard extraterrestrial spaceships.

Mary’s research also explores the evidence from scientific, biological, psychological, anthropological, spiritual and historical perspective to support what she believes is a ‘genetic’ engineering program, for ‘upgrading’ homo sapiens, leading to a paradigm shift in human consciousness, which these children demonstrate. Data suggests such children are being altered and transformed on many levels through extraterrestrial encounters. Mary’s research includes some of the latest DNA research which could qualify how this up-grading could and may occur.

Though many medical professionals are still sceptical, about Contact experience, in November 2003, Mary’s work was featured in the Australian Doctor Focus Magazine, a prestigious Australian medical journal. “Alien Invasion, why we need to believe. ‘A growing number of professionals in the medical community share such conclusions and have spoken publicly. Such people include the late world-renowned Harvard Medical School professor of psychiatry, Dr. John E. Mack, author of "Passport to the Cosmos". and Dr. Janet Colli, author of "Sacred Encounters’